What is Dermoid Cyst? What are the Organs that It Originates From?

If the last sentence needs to be more clarified, ovarian dermoid cysts originate from all three layers (endoderm/mesoderm/ectoderm), which play a role during embryonic development.
Dermoid cysts of the ovary constitute 10-20% of all ovarian tumors (all including any benign and malignant ones). It is the MOST COMMON ovarian germ cell tumor and the ovarian tumor MOST COMMONLY seen in people under 20 years of age (3, 4).

Ovarian Germ Cell Tumors; what is the Group that Dermoid Cysts are Classified in?

In the following figure, you see which tumor origins from which tissue of the ovary. The classification describes tissues that all benign and malignant tumors originate from, by means of a simple diagram. As is seen, mature cystic teratomas originate from the reproductive cells, and consist of mature cells as the name implies.

Now, let me share with you an important secret. 🙂 No matter whether in humans or any other living creatures, the more the tumoral tissues have resemblance to normal cells, the more they act as benign tumors; i.e, they do not metastasize in an incoherent way and do not recur, no matter the extent of the maturity, i.e. abnormality of the cells of the consisted tomoral tissue. After all, they are benign.

Therefore, the word “mature” indicates that important and benign dermoid cysts are often benign. If we call them “immature”, they are malignant. For example, immature teratomas malignant tumors.

As you can also see on the chart, dermoid cysts (mature cystic teratomas) constitute a sub-group of teratomas among germ cell tumors (reproductive cell tumor tumors). 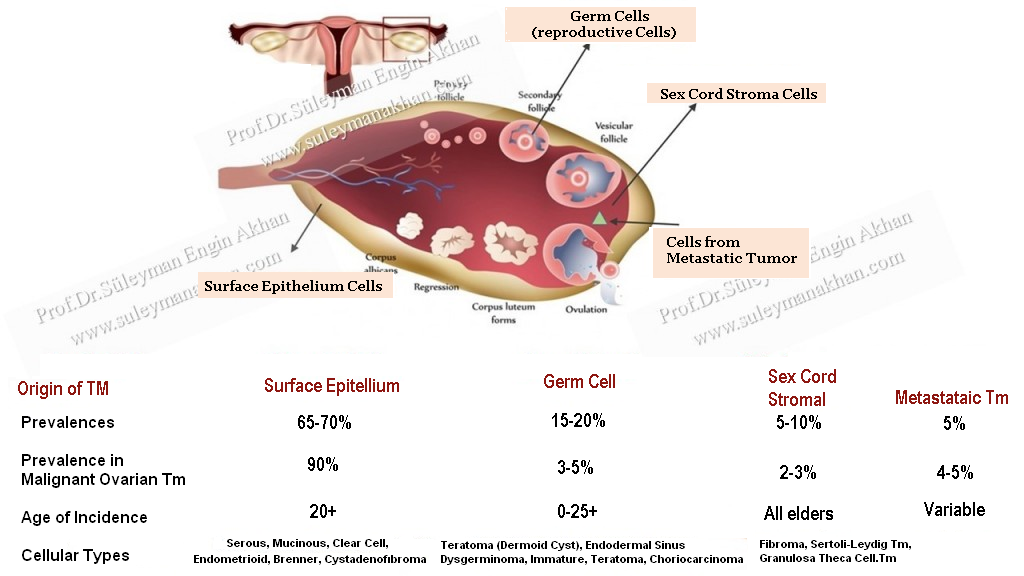 If we need to go into detail, ovarian germ cell tumors are classified in two main groups:
a. Embryonal tissue-derived tumors (teratomas, their subgroups, and disgerminomas)
b. Tumors originating from extra-embryonic fetal cell populations (e.g. placenta), and tumors formed jointly by cells of the both groups.

A significant part of these neoplastic formations, especially the ones that constitute the teratoma part, have a benign structure. They are not malignant. If they need to be classified according to the World Health Organisation (5):

Therefore, I have alsa carried out academic studies. 🙂 If you want to read my article published in the international journal SCI,